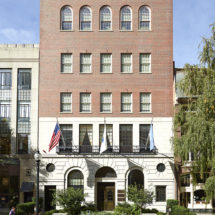 Four nations are set to unite and share their 2020 Commemoration Program plans for the 400th anniversary of the Mayflower Voyage with an audience of guests invited to attend the event, which will be hosted today at the New England Historical Genealogical Society in Boston.

Presenters will include representatives from Mayflower 400, Leiden 2020, Plymouth 400, Inc., VisitBritain, American Ancestors, and the General Society of Mayflower Descendants.

Over the course of the event, each of the nations: United Kingdom, United States of America, the Wampanoag Nation, and the Netherlands will share their unique perspectives of that pivotal moment that defined the course of world history.

The four international Mayflower compact partner nations are united in their passion to commemorate the anniversary and to celebrate shared values of freedom, democracy, humanity, and the future. Anticipating the 400th anniversary of the voyage of the Mayflower in 2020, American Ancestors and New England Historic Genealogical Society (NEHGS) will play a major role in its national and international commemoration.

“The story of what happened in 1620 is foundational to the story of our democracy and has widespread genealogical and historical ramifications,” stated Brenton Simons, President and CEO of American Ancestors and NEHGS, in his announcement of programs to be undertaken by the organization leading up to 2020. These programs will be highlighted at the Mayflower 400 Launch Event in Boston, Massachusetts, at the headquarters of American Ancestors.

“As the largest nonprofit involved—with more than 250,000 members and millions of online users—we have a responsibility to educate people everywhere about this historic occasion,” he said. “We will carry out our work in many different ways—through events, tours, published scholarship, exhibitions, educational opportunities, and online research resources. We have had an important stake in telling this story since our founding in 1845 and we are dedicated to helping our members and the public connect to this important moment
in American history,” Simons added.

“We’re privileged to be able to host distinguished representatives of four nations that are all deeply committed to the commemoration of this 400th anniversary—and the stories and legacies the historic event has given us.”

Charles Hackett, Chief Executive Officer – Mayflower 400 said, “This project explores centuries of shared history between Britain, Holland and America. It is an opportunity to create a broad cultural programme in multiple locations, to bring visitors to the UK to explore the past along the national Mayflower Trail, and to increase awareness of this pivotal event on all four nations.”

Some of the Pilgrims aboard the Mayflower were brought from Holland on the Speedwell, a smaller vessel that accompanied the Mayflower on its initial departure from Southampton on August 15, 1620. When the Speedwell proved unseaworthy, the Mayflower set sail on September 16, 1620 from Plymouth, UK, to voyage to America, known at the time as the New World. Its passengers were in search of a new life of religious freedom.

On the crowded ship, many endured hunger and terrible living conditions, but this was only a sign of what was to come. To make matters worse, the winter storms blew the ship off course. Instead of landing in New Virginia, the ship arrived in Cape Cod Harbor, at what is now Provincetown, on November 21, 1620. That day, the settlers wrote the Mayflower Compact. Signed by 41 men on board, the compact was an agreement to cooperate for the general good of the colony. They would deal with issues by voting, establish
constitutional law and rule by the majority. This was later claimed to be the foundation of American democracy.

“The story of 1620 is complex with multiple perspectives but is one which is relevant now more than ever,” stated Michele Pecoraro, Executive Director of Plymouth 400, Inc. “The way the story is being told is different than past commemorations because each of the four nations involved are at the table together for the first time. The cultural contributions and traditions that began with the interaction of the Wampanoag and English peoples have significantly shaped the building of America but until now, this complex story was told
from a narrow perspective. For the first time the Native voice is included and the fact that the story begins with the indigenous people who had lived on this continent for thousands of years and are still here today.”

Michael Roumen, Executive Director, Mayflower 400 Leiden comments: “Leiden is proud to participate in this four nation commemoration, focusing on the themes that make this fascinating and complex story relevant to this day, such as migration, tolerance and oppression. We are putting together local and international programs (cultural, educational and economic) aimed to contribute to mutual understanding and critical reflection, and to inspire future generations.”