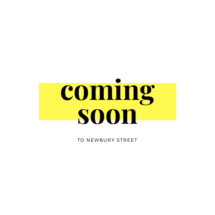 Blue Bottle Coffee May Be Opening on Newbury Street

It looks like a California-based coffee roaster could be opening a new cafe on Newbury Street.

According to a licensing board hearing page within the city’s website, Blue Bottle Coffee is planning to open on Newbury Street in the Back Bay, moving into a space between Dartmouth Street and Exeter Street. If approved, the new cafe–which would have an outdoor patio–would join others in downtown Boston, at the Prudential Center, and in Cambridge’s Harvard Square, along with an upcoming shop in the Kendall Square section of Cambridge.

The Oakland-based Blue Bottle Coffee is considered to be part of the “third-wave” of specialty coffee shops that focus on high-quality beans.

The address for this proposed location of Blue Bottle Coffee is 163 Newbury Street, Boston, MA, 02116. The website for the company is at https://bluebottlecoffee.com/