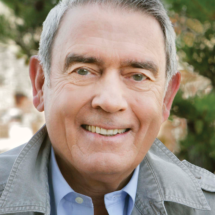 At its annual Family History Benefit Dinner recently, American Ancestors and New England Historic Genealogical Society (NEHGS) honored broadcast journalist Dan Rather, an individual it lauded as “a living legend—one of the most extraordinary communicators of our time.”

D. Brenton Simons, President and CEO of NEHGS, presented Rather with the organization’s Lifetime Achievement Award in broadcast journalism, citing Rather’s career role as “an integral part of our national conversation.” And, following the tradition of NEHGS at its annual benefit gala, Simons presented Rather with a detailed genealogy, expertly researched by NEHGS staff, revealing the legendary television anchor’s ancestry rooted in early America—and a notable kinship with U.S. presidents and political figures.

A dinner conversation with Rather followed and was conducted by Bill Griffeth, co-anchor of Nightly Business Report on CNBC.

Also honored by American Ancestors at its annual benefit were Margo Georgiadis, CEO of Ancestry, and Jonathan Tufts Woods, President General of the Society of the Cincinnati, for their personal and professional contributions to the field of family history.